Love me some Roller Derby. And I hadn’t had any in a while when I noticed a neon pink flyer posted outside a JavaLava in Flagstaff last summer. It was on for the next day, this special Roller Derby bout, tied-in with Gay Pride Week. If ever there was a must-see event, this was it. 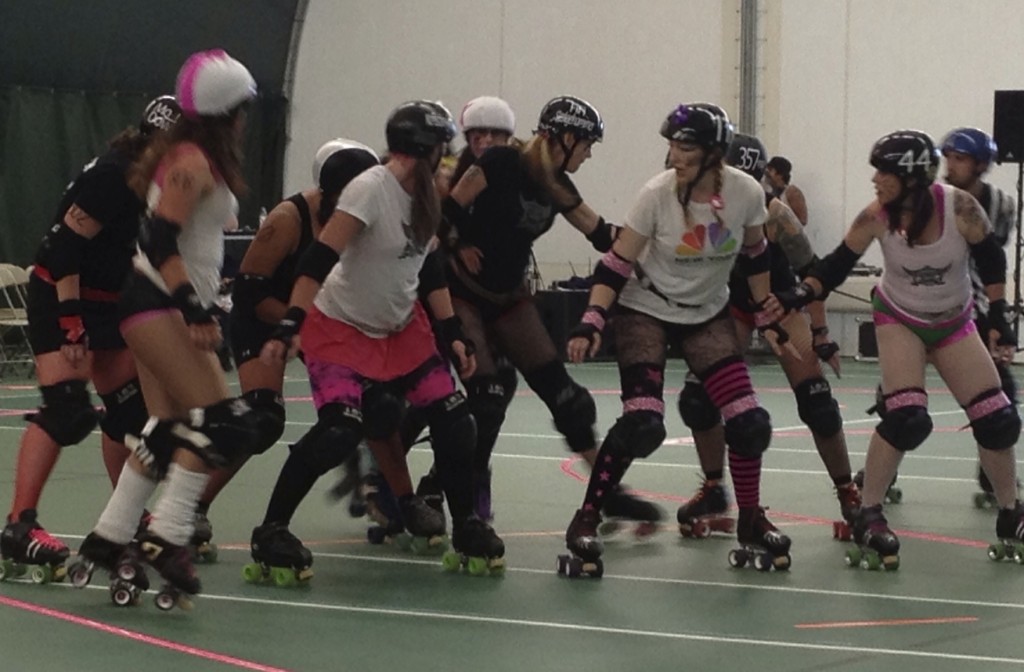 Admission was ten bucks, covering two Roller Derby match-ups, a merchandise booth, and a half-time show MC’ed by a drag queen. The latter, I guessed, was the ‘hook’ for Gay Pride.

First, the national anthem. Then, for the benefit of newbie spectators, the announcer reviewed Roller Derby basics – how the game is played. To me, it sounded like stand-up comedy meets a metaphor for life, but I listened-up. “Two teams of skaters called Blockers get a head start circling around the track. Two ‘star’ skaters – one from each team – called Jammers try to make their way through the pack. Blockers do what they can to prevent the opposing Jammer from advancing, while helping their own Jammer get through. Once the Jammers make one full pass around, they start scoring points.”

Got that? Yeah, me neither. But I still like to watch.

Next came player introductions. Now, as entertaining as it is to follow sixteen women athletes in tight, black clothing ­as they skate, bend, bounce, hold, elbow, trip, jump and get in the way of others so that their friend can get ahead, if the truth be told, it’s hearing the names of Roller Derby players that really does it for me. Threatening, intimidating, sexy and downright suggestive (my personal favorites), the names – often plastered on their Roller Derby outfits – are just hilarious, and they say all that needs to be said about this high-competitive, feminist sport.

One by one, the announcer introduces them:  Juicy Brute, Dooms Daisy, Pipi Wrongstockings, Faye Tality, Sassy McNasty, Kim Malicious, Krystin Ite, Miss D Meaner, Mo U Down, A.Systole and Bev Rage. These, mind you, were just one team. 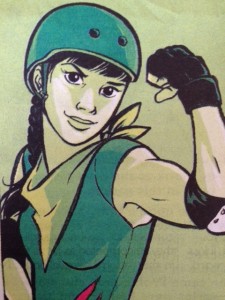 As the whistle sounded for the first jam to begin, I was still shaking my head, smiling, repeating aloud, the skaters’ names I thought to be most clever and amusing. And suddenly, the connection to Gay Pride’s sponsorship hit me again … like a six-foot-two Blocker in fishnets and face paint.